Phil Weiss reported today (https://mondoweiss.net) on the latest defection from Zionist dogma. One of the respondents correctly pointed out regarding these new “converts”—” More action please and a lot less sitting shiva for what you thought ‘Israel’ was. It was always what it is right now. You just didn’t want to see it.”

For American Jews we have gone from a duty to support Israel to a duty to question Israel to a duty to oppose Israel. This law did that,” Carnegie Endowment scholar and former editor of Foreign Policy  David Rothkopf wrote yesterday, about the new law declaring Israel the “nation-state of the jewish people.”

“How many abuses must take place? How many laws like this that claim racism as the national character and ethnic purity as its goal?… my point is that at some point my duty as an American (and as a Jew) is to actively oppose an ethno-nationalist regime that is systematically undermining the human rights of people within its borders & threatening peace and int’l values….

For several years I have been arguing to friends in Israel that a generational change in the US would irrevocably alter the relationship between the countries. Now, it is clear, that a change in the character of Israel’s leadership & laws might accelerate that.”

Rothkopf said Israel was no longer in his heart because its identity was changed, racism being “the national character.”There is a difference between bad laws and a fundamental change in the identity and values of the nation. The nation-state law pushed Israel across that line.

“Ten weeks ago, Rothkopf was enraged by the Gaza massacre–again, as a Jew.

“Israel’s brutal treatment of the demonstrators in Gaza…and Gaza itself…is the anti-Passover. It represents the height of hypocrisy: A supposedly Jewish state violating the most basic concepts of the religion in order to defend its “right to exist. Zionism was “exactly the wrong response to history.” 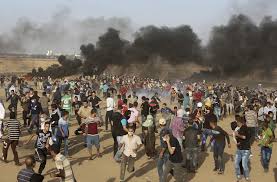 “The best protection (as the United States has demonstrated) is to institutionalize the concept of tolerance and diversity and to work tirelessly to ensure that the powerful impulses to segregate and divide are quashed. It is not easy. But it has made the United States the most successful experiment in cultural diversity in history — though only after a series of horrific errors, including slavery and the genocide against Native Americans and the devaluing of the role of women, were ultimately remedied. We’re not there yet.

Ten years ago Rothkopf, accepting the Jewish duty of supporting Israel, smeared Walt and Mearsheimer as anti-Semitic cranks for slamming the Israel lobby:

They may not be anti-Semites themselves [meaning: they may be] but they made a cynical decision to cash in on anti-Semitism by offering to dress up old hatreds in the dowdy Brooks Brothers suits of the Kennedy School and the University of Chicago.

Who will be next to shed the Jewish duty to support Israel? And what liberal Zionist who sees it as his duty “to oppose Israel” will endorse the 13-year-old Palestinian call for solidarity, Boycott, Divestment and Sanctions?

Thanks to Yakov Hirsch.