So writes Israel’s premier columnist Gideon Levy. For those not paying attention to UK politics, one can easily get a glimpse of the last throes of Zionism there. These are desperate times for  all who had romanticized the Israel of the dime store novel Exodus and  refused to go beyond Israel’s effective hasbara campaign against anybody  who challenged the brilliantly manufactured  lie that Israel was a shining example, excuse me, of the only democracy in the Middle East,

Now that the wheels have come off  that canard and computerization, social media and cell phones have laid bare the daily brutalization of an occupied indigenous people, the last true believers have pulled out all the stops and attempted to rescue the colonial project called Zionism. The attacks have become shriller and shriller reaching hysterical levels of demonization. The attack on UK Labor leader Jeremy Corbyn is one such example  and Levy does it justice in this article.

Jeremy Corbyn is a paragon of a leftist, one who has fought his whole life for the values he believes in. Israelis regard him as a sort of alien – the left here has never been led by an Israeli Corbyn, nor by anyone who can hold a candle to him.

Corbyn is a brave man. He voted in parliament 553 times against his party’s position, and yet he took its leadership by storm. He voted against the war in Iraq, against nuclear weapons and against British rule in Northern Ireland. He was active in Amnesty against Augusto Pinochet, and was arrested in anti-apartheid demonstrations in South Africa.

With such a conscience and courage he wouldn’t have gotten anywhere in Israel, apart from Breaking the Silence. In Britain he has a good chance of being elected the next prime minister. Nothing lights up the imagination and inspires hope more than that. Anyone who wants to see the world take action against the Israeli occupation should dream of Corbyn.

Corbyn has been declared the next enemy of the Jews. Viktor Orban is a righteous among the nations; the American alt-right is the rock of Israel and its savior; Rodrigo Duterte, the Philippines’ leader who called to kill millions “like Hitler,” is a welcome guest in Israel – and Corbyn is the enemy of the people.

The Jewish establishment in Britain and Israeli propaganda have taken out a contract on him, to foil his election: He’s an anti-Semite, Labor is anti-Semitic, Jewish life in Britain is in “existential danger,” no less, as three British Jewish newspapers cried out in a joint editorial.

While the situation of any Jew in Britain is better, safer, more egalitarian and freer than the condition of any Arab citizen in Israel, not to mention the Palestinians in the occupied territories, the Jewish establishment’s desperate cry for help raised an uproar and commotion against Corbyn.

The Israeli press hastened to join the incitement campaign – branding every Labor utterance as anti-Semitic. Party Member Peter Willsman branded the rabbis who accused his party of anti-Semitism as “Jewish Trump fanatics” – gevalt, anti-Semitism. Some commentator accused Corbyn of being too apologetic, another accused him of not apologizing. Even a young, impressive journalist like Antonia Yamin of Kan hastened to join the instigation crusade.

Let it be said: Corbyn is a staunch, consistent opponent of Israel’s occupation policy. That is his right; as a true leftist it’s his duty. On Labor’s fringes there are certainly anti-Semitic circles; Corbyn stated several days ago in an op-ed in The Guardian that they have no place in his party. The attempt to reduce what Labor defines as anti-Semitic, unlike the prevalent definition of the International Holocaust Remembrance Alliance, doesn’t necessarily make the party anti-Semitic.

But the Jewish-Israeli propaganda persists: When Israel enacts the apartheid law and its soldiers kill 160 unarmed demonstrators on the Gaza border, the only response is to accuse anyone who criticizes this of anti-Semitism. It works, it places the accused in the prosecutor’s role.

When an Israeli sniper shoots dead a legless man in a wheelchair, and a nurse – the Jewish people is a partner. Thus Israel’s policy is inflaming anti-Semitism in the world. It may and should be criticized, as Labor does and as Corbyn does, and the gagging, in the form of labeling any criticism as anti-Semitism, is outrageous. It also increases anti-Semitism and the feeling that the Jews are acting like bullies and using their power of emotional blackmail. 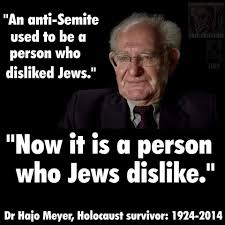 Leave the incitement campaign against Corbyn and wish him luck: He’s a man of conscience, and I hope he’ll be Britain’s prime minister. It could be good for Israel as well.