It was the  late israeli diplomat Abba Eban who said his greatest achievement was to conflate anti=zionism with anti-Semitism.This was a terribly cynical remark, a crass attempt to shut down any criticism of Israel. The best answer to this was the great Israeli journalist Amira Hass who wrote on Oct 7, 2015:

Young Palestinians do not go out to murder Jews because they are Jews, but because we are their occupiers, their torturers, their jailers, the thieves of their land and water, their exilers, the demolishers of their homes, the blockers of their horizon. Young Palestinians, vengeful and desperate, are willing to lose their lives and cause their families great pain because the enemy they face proves every day that its malice has no limits.

Independent Jewish Voices Canada (IJV) has joined over 35 Jewish organizations worldwide in a statement condemning global attempts to stifle criticism of Israel. From South Africa to Sweden, New Zealand to Germany and Brazil, this is the first time so many Jewish groups have come together to defend Palestinian human rights advocacy from attack.

“From our own histories we are all too aware of the dangers of increasingly fascistic and openly racist governments and political parties,” the global letter states. “The rise in antisemitic discourse and attacks worldwide is part of that broader trend. At times like this, it is more important than ever to distinguish between the hostility to or prejudice against Jews on the one hand and legitimate critiques of Israeli policies and system of injustice on the other.” 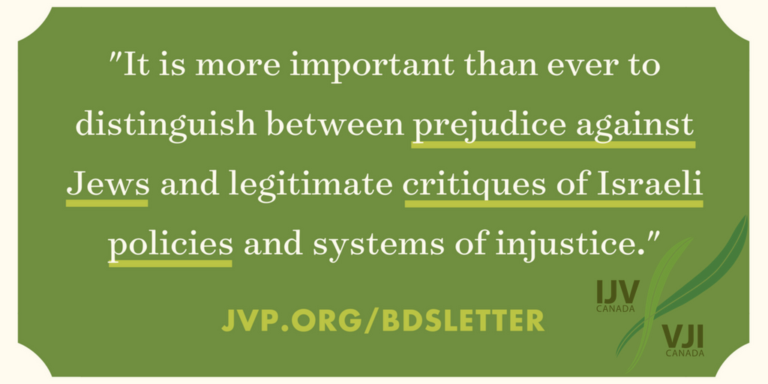 The United States has increasingly witnessed legislative efforts to criminalize the boycott of illegal Israeli settlements and repress advocacy for Palestinian human rights by defining such acts as antisemitic, with two bills currently under discussion in the US Congress. Such efforts are mirrored at the state level, where more than 25 states have considered or enacted forms of legislation targeting those who advocate for Palestinian rights. Of particular concern is the growing usage of the International Holocaust Remembrance Alliance (IHRA) definition of antisemitism, which is intentionally worded to equate legitimate criticisms of Israel and advocacy for Palestinian rights with antisemitism, as a means to suppress the former.

A similar approach is being employed across Europe. In France and Germany, the bank accounts of BDS groups have been closed and people involved in campaigns promoting the boycott of goods from illegal Israeli settlements have been convicted of incitement to hatred. The UK has witnessed ongoing battles over the legality of local government boycotts focused on products from Israeli settlements.

The state of Israel is waging its own campaign against advocates of BDS. In January, the Israeli Ministry of Strategic Affairs announced a ban prohibiting the leaders of 20 organizations from around the world from entering Israel, including the US group Jewish Voice for Peace, for supporting BDS. And in 2015, the Israeli High Court upheld a law which allows individuals to sue those who call for the boycott of either Israel or companies profiting from activities located in illegal Israeli settlements.

In Canada, legislative attempts to brand Palestinian rights activism as antisemitic go back to 2009 when the widely criticized Canadian Parliamentary Coalition to Combat Anti-Semitism was formed. The Federal government has since adopted a definition of antisemitism that is nearly identical to that of the IHRA and passed a non-binding motion to condemn the BDS movement in 2016. The Ontario legislature followed suit shortly thereafter.

“What we’re experiencing in Canada is the same phenomenon as in the US, Europe and across the globe,” said Corey Balsam, IJV’s National Coordinator. “Supporters of Israel’s illegal occupation and its violent treatment of Palestinians have found that they can no longer effectively defend Israel’s increasingly outrageous actions, so they have resorted instead to trying to suppress those who engage in legitimate criticism of and protest against Israel’s policies.”

“IJV is proud to be part of a growing chorus of Jewish organizations across the globe that are taking a stand for human rights and against attempts to conflate criticism of Israel with antisemitism,” Balsam concluded.