A state ruling over a hostile population of one million people will necessarily become a Shin Bet state, with all that this implies for education, freedom of speech and thought and democracy. The corruption found in any colonial regime will affix itself to the State of Israel. The administration will have to suppress an uprising on the one hand and acquire Quislings, or Arab traitors, on the other.”

First new flash. If headed for Israel do not bring any Palestinian literature. You will be sent packing right away. You thought this was a democracy? Think again. Even when leaving you are reminded it’s no democracy. Leaving in 2010 they confiscated pilgrims’ copies of Breaking the Silence IDF soldiers of conscience  testimony of the dirty work they do under occupation. I hid mine in the middle of a club bag.Others were not as successful. You will be grilled if you dared visit Palestinian centres.

Here is Gideon Levy’s reflection on the paranoid policies of Israel today.

News flash for the minister in charge of combating hatred, Gilad Erdan: One is allowed to hate Israel. Sometimes one must even hate its policies. A democratic country doesn’t ask new arrivals whether they love it. It’s none of their business. The gates of democracy are open to everyone, as long as they don’t endanger its security. That is the test. 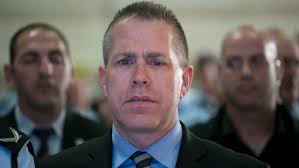 The world that Gilad McCarthy is building for us now, together with the Shin Bet security service that has long been in charge of this, is motivated by the darkness of a different worldview. Erdan described it well on Friday.

“Everyone understands,” he wrote, “that these are hypocritical organizations uninterested in human rights. They will never act to help the citizens of Syria or Iran. It’s not human rights that motivate them, but hatred of Israel.” Erdan tried to excuse banning the entry to Israel of the student Lara Alqasem and in so doing revealed his worldview once again.

“Everyone understands,” Erdan? Well, almost everyone. Even the minister of strategic affairs can’t yet speak for everyone in Israel. Maybe he will be able to do so soon.

Meanwhile, there are also some people who don’t understand. Not everyone here has been brainwashed by the propagandistic lies. The “hypocritical organizations” are more interested in human rights than anything else. They are people of conscience. Some are veterans of long-standing work against the Vietnam War and apartheid in South Africa, some are young people who should be a source of pride. At a time when most Israelis their age are not interested in anything that doesn’t involve them directly, they are fighting for something. They are certainly immeasurably more moral than any settler in the territories.

Some are fighting on a number of fronts – Palestine, Kashmir, animal rights, Syria, nuclear arms, climate, the environment and sweatshops. Other choose to focus on one struggle – not all of them multi-task like Erdan. Richard Gere dedicates his effort to the liberation of Tibet and Sting focuses on saving rainforests. Nobody complains that they focus on a single struggle. Roger Waters chose a different one, no less moral or just. Three hundred Jewish heroes left Palestine in the 1930s to fight fascism in Spain; no one asked them why Spain, no one thought they hated Spain

Erdan is furious because the protesters against Israel aren’t working for the Syrian or the Iranian people. His concern for these people is heartwarming, and responsibility for the comparison between Israel and these two countries is his – but the world expects Israel to be different. It receives an abundance of benefits based on this expectation.

His secret ministry should close immediately. It has a director general who is a former chief military censor, with lots of top-secrecy and much less professionalism, as is shown repeatedly at Ben-Gurion Airport. With generous government funding and money sponged off of dubious Jewish organizations, it has no place in a democracy. It acts against people who oppose the regime the way the Soviet Union acted against its opponents abroad. They fight against seekers of the justice that Israel opposes. These people don’t hate Israel, they despise its regime. It should be despised and fought against.

There are not many other struggles in the world today that are loftier than the struggle for justice for the Palestinian people. There also fewer things than threaten Israel more than the combination of Erdan’s ministry and the Shin Bet at Ben-Gurion Airport.