I the LORD have called unto you in righteousness, and have taken hold of your hand, and submitted you as the people’s covenant, as a light unto the nations.

These stirring hopeful words of Second Isaiah refer to a covenanted people, Israel, not the country. Righteousness and justice will be the way of the Lord, the people will be l’or goyim, a light unto the nation. 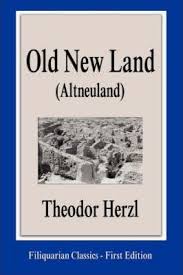 Reading the book today it is clear Herzl was no Zionist.It drives hard core Zionists wild.

In his new model state, Jews are not privileged and religion is unimportant.  His utopia rejected “the ghetto languages” of Yiddish and Ladino. a for Hebrew, nobody can speak it and how do you order a train ticket.

Herzl in his five years as leader of the Zionist movement had become more universalist in his thinking. No more a “Society of Jews” but a New society” was his goal. Everybody was welcome—except for fundamentalists!

In this dreamworld, Herzl has through his characters become a cosmopolitan. Persecuted Jews were at home here but also all religions and all peoples. Prophetically he wrote about “the return of the Negroes.”

The arch villain as  Michael Brenner notes is the Orthodox rabbi Dr Geyer who wants a pure Jewish state.Herzl is no fan of exclusion.he would not dig rabid settlers.

The Prussian nobleman Kingscourt wonders if he could become a member of the New society. enter the hero David Littwak

Let me tell you neither I nor my friends make the least distinction between one man and another. we don’t ask about anybody’s race or religion. It’s enough that he is human…Liberalism,Tolerance, love of mankind! Only then will Zion be Zion.”

In other words not the Israel of today

Sounds like  universal Judaism not the racist country Israel is today.

Palestinians would sure love this Herzlian line of David Littwak:”My last word to my people will be: “See to it that the stranger in our midst feels at home.”Ask a Palestinian how he or she feels.

Herzl worked on his novel for three years.It is a serious representation of  what a Jewish society would look like unlike today’s Israel which makes a mockery of being l’or goyim.