Israel’s war on the truth and those who dare speak it is unrelenting.

In recent days there have been disturbing new examples of how far Israel and its lobby will go to prevent people learning about its crimes against Palestinians.

Right now they are waging a vicious campaign of lies against Marc Lamont Hill because he gave a moving and principled speech at the United Nations to mark last month’s International Day of Solidarity with the Palestinian People.

The Zionist Organization of America is accusing Hill of anti-Semitism and of making “genocidal” calls against Jews. Under pressure, CNN fired him from his role as a political commentator. 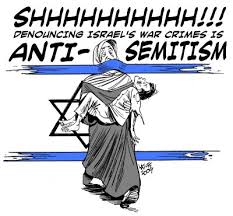 But the lobby groups were not satisfied and are still demanding that Temple University, a public institution, fire Hill from his teaching position.

Civil rights groups are clear that this would violate Hill’s constitutional right to free speech. But it’s a sad fact that leaders of powerful institutions just don’t care. They are more interested in appeasing big donors than respecting the First Amendment. O’Connor said that Temple was looking for ways to punish Hill. This would be far from the first time that a university – supposedly a bastion of free speech – has done the bidding of Israel’s lobby by attacking the rights and livelihoods of students and educators.

But what makes the assault on Hill particularly troubling is that he is an outspoken Black proponent of solidarity with Palestine.

Israel’s war on the truth and those who dare speak it is unrelenting.

One of the facts revealed in the censored Al Jazeera film obtained and released in full by The Electronic Intifada last month is how the Israeli government sees growing Black solidarity with Palestinians as a grave danger to Israel’s efforts to whitewash its crimes.

That’s why Israel is attacking people like Hill, whose stance is rooted in a common struggle against racism and colonialism, in an effort to divide and conquer the movement for Palestinian rights.

Unfortunately it doesn’t stop there. As powerful institutions bow to Israeli pressure, so are the social media platforms many of us now rely on for news and to freely exchange views.

In an unprecedented move last Sunday, Twitter forced The Electronic Intifada to delete a tweet linking to a story that contained images of undercover Israeli commandos who recently raided Gaza, almost sparking a full-scale war.

After holding out against pressure, Twitter has now joined Facebook as a willing accomplice in Israeli censorship.