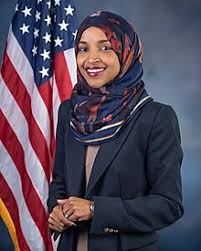 The USA House of Representatives  for the first time has two Muslim women. No big deal, you say. Well you’re a Canadian.

But in America the fit has hit the Shan because these uppity women are actually supporting BDS. So what.

And I think the context here is really important. For a l long time, the bipartisan piety was not just that the U.S. has to support Israel, but that, in particular, the effort to boycott Israel in protest of its occupation of Palestine is not just misguided, but anti-Semitic. That’s the official position of the Democratic Party, of Hillary Clinton, of Chuck Schumer, of every leading Democrat. And now, suddenly, you have these two really exciting, dynamic, charismatic women of color newly elected to Congress, the first two Muslim women elected to Congress, who both are supporters of the boycott of Israel, which the Democratic Party says is bigotry and anti-Semitism, and it’s created this very awkward moment. So, of course, the minute two Muslim women arrive in Congress, they’re going to get attacked as anti-Semitic if they’re critical of Israel, which they are, just like Keith Ellison, the first Muslim ever elected to Congress, got vilified as being an anti-Semite by Haim Saban, the billionaire funder of the Democratic Party, when he tried to be the chairman of the DNC.

What the congresswoman said is very uncontroversial. Everyone knows AIPAC is an extremely intimidating lobby, just like the NRA is. There’s nothing wrong with pointing that out. There’s certainly nothing anti-Semitic about saying that, about criticizing the Israeli government for its aggression and militarism. And anybody who cares about Palestinians and about the ability of Muslims in the United States to be able to speak freely ought to be defending her.

And the last point I would add is, my point was, in saying how weird it is, what a priority it is for U.S. politicians to defend Israel, was based on the fact that the very first bill passed by the U.S. Senate was not about helping Americans; it was about empowering states to punish people who support a boycott of Israel, a bill sponsored by Marco Rubio, who got more money from Sheldon Adelson than any other politician in 2016, and then was supported by half of the Democratic Senate Caucus. That’s what I was referring to. And the congresswoman was saying a big reason for that is the monied interests in Washington that demand that. And of course everyone knows that’s true, and to call that anti-Semitic is just obscene.

The Clintons won’t go away

Chelsea Clinton also tweeted, “I will reach out to her tomorrow.” She wrote this last night—Ilhan Omar. “I also think we have to call out anti-Semitic language and tropes on all sides, particularly in our elected officials and particularly now.”

Yeah. When did—who is Chelsea Clinton to become the spokeswoman about what is and isn’t permissible debate when it comes to Israel? Her parents are the probably the two individuals most responsible for turning the United States into a steadfast defender of an apartheid, murderous and oppressive regime in that region. Her two parents are probably the leading politicians most responsible for ensuring the ongoing repression of the Palestinian people. So, Chelsea Clinton, who I don’t think has any public status other than being the daughter of two famous politicians, really has no place in trying to set the boundaries of what is and isn’t permissible debate, given what her family has done—so much harm—to ensuring that Palestinians don’t live with the basic, minimum dignity and sovereignty to which every human being is entitled.