Josh Ruebner is one of the founders of Jews for Peace in Israel and Palestine which later merged with Jewish Voice for Peace. On March 13 he wrote  Timely UN report says IDF soldiers likely committed war crimes and worse against Gaza’s march

This is part of his dispatch

At the end of February, a Commission of Inquiry established by the UN’s Human Rights Council issued a preliminary report on Israel’s response to the first nine months of the Gaza-based Great March of Return that stated that it had reasonable grounds to believe that during the march, “Israeli soldiers committed violations of international human rights and humanitarian law,” some of which “may constitute war crimes or crimes against humanity…”

The 3-member Commission was headed by Santiago Canton of Argentina. It urged Israel to investigate all the killings and injuries inflicted by its soldiers against participants in the march. But it also urged the UN’s High Commissioner for Human Rights to provide the dossiers on alleged perpetrators to the International Criminal Court (ICC) and other bodies.

The Commission’s full report will be issued on March 18. The videos and infographics in this blog-post come from a web portal highlighting the Commission’s work that’s on the the UNHRC’s website.

In dozens of disturbing examples, the commission documented the shocking cruelty and callous disregard for human life exhibited by Israeli soldiers toward unarmed Palestinians demanding their basic human rights. Take, for example, the case of Alaa Dali, a 21-year-old cyclist who was injured during the first day of GMR. Dali “stood holding his bicycle, wearing his cycling kit, watching the demonstrations, approximately 300 m[eters] from the separation fence” when an Israeli sniper’s bullet tore through his leg. “His right leg had to be amputated, ending his cycling career.”

What coursed through the mind of the Israeli sharpshooter as they zeroed in on Dali, decked out in cycling paraphernalia, through the scope of their high-powered rifle? That here was an opportunity to deprive a Palestinian of his possibly sole enjoyment in life, already so precariously deprived and circumscribed by a brutal and unrelenting blockade?

Or, consider the fact that the commission received testimony from many young Palestinian men and women whom Israeli snipers shot in the lower abdomen and groin, rendering them incapable of having children. Was this pattern a coincidence or did certain Israeli soldiers view Palestinians in such a dehumanized and racist fashion as to judge their reproductive capacity a “demographic threat” to continued Israeli Jewish supremacy?

On May 14, 2018, hundreds of US and Israeli officials and dignitaries jubilantly gathered in Jerusalem to witness the Trump administration make good on a key campaign promise: to move the US Embassy to Israel from Tel Aviv to Jerusalem.

Just 60 miles away, in the Israeli-occupied and -besieged Palestinian Gaza Strip, an entirely different and horrific scene was unfolding. An estimated 35,000 to 40,000 Palestinians protested at 13 sites throughout the enclave in the planned culmination of the GMR, which had initially been planned to last only six weeks.

The Commission’s report quoted one international journalist who was covering the protests as saying:

There was a constant stream of bloody bodies being carried back towards the ambulances. It was surreal and endless. It became almost normal, it was happening so often. A shot, a person falling, people carrying the body away… The number of wounded was astonishing. I couldn’t say how many people I saw who were shot because it was so high. I have covered wars in Syria, Yemen, Libya. I have never seen anything like this. The slow methodical shooting. It was just shocking. 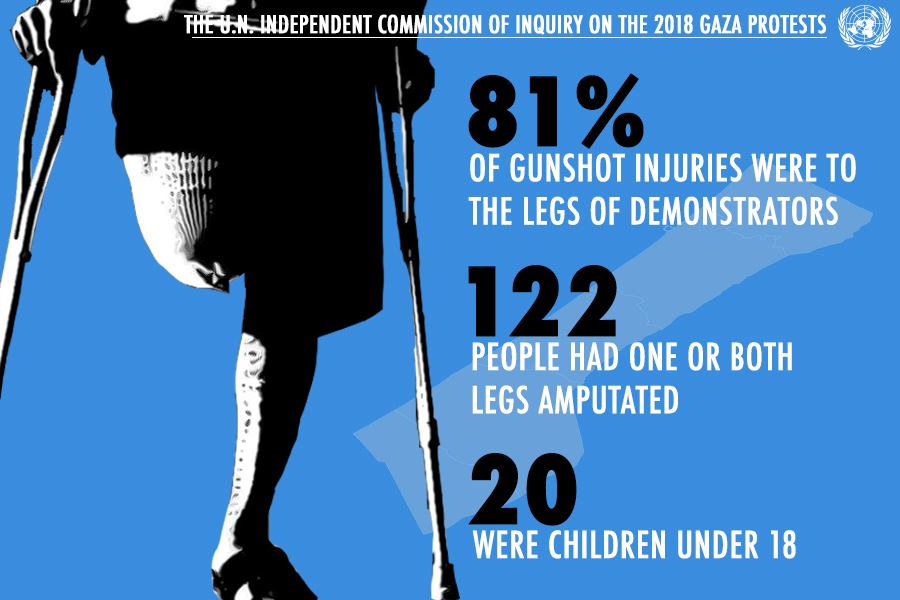 Ruebner’s query is really ages old and is a deeply human one.the question is hardly unique to Israelis. We now know “good Germans” are everywhere, robots who surrender their humanity in times of combat and war.

It is in no way exceptional that Jews of Conscience are asking it here.

Why Are We Israelis So Cruel to So Many? We are doing the opposite of ‘what is ‘what is hateful to you, do not do to your neighbor.’The cruelty is not innate, it is a form of practicing until you become accustomed. To know and be horrified: From where has this Jewish cruelty sprung? It contradicts so much of what we thought about ourselves for generations.

What is reported in Hebrew in Haaretz passes as if it was never written, and it too is just a thousandth of a percent of the acts that the direct descendants of the Jewish refugees from Europe and Arab countries are always carrying out. We have confiscated land from the Palestinians who are citizens of Israel, and are not allocating them other land to build towns? With special joy did we did so and continue to do so.

“Only an internal revolution can have the power to heal ourpeople of their murderous sickness of causeless hatred… It is bound to bring complete ruin upon us.